When crops are placed in sealed airtight storage, insects and aerobic microflora that exist within them respirate, consuming the available oxygen and producing CO2.

The airtight storage restricts gas exchanges between the internal and external environments and the stored commodity, locking in the initial levels of moisture while controlling pests due to the lack of oxygen. Grain is  routinely stored in silo-bags for more than six months without losing quality.

South America has adopted the widest use of this approach via the Silobag system for temporary storage of dry grain and oilseeds. During the 2008 and 2010 harvest seasons, more than 33 million and 43 million metric tons of grain respectively, were stored in these plastic grain bags in Argentina alone. The stored commodities included corn, soybean, wheat, sunflower, malting barley, canola, cotton seed, rice, lentils, sorghum, beans and even fertilizers.

Maintaining an airtight seal of this storage has proven a challenge at times. Large bunkers and grain bags often have sealing breached by birds pecking holes in the liner in Australia.  Deer often break the seals of hermetically stored grain in bags in Canada. Discovery of breached seals can be challenging, underlining the necessity of careful ongoing monitoring. 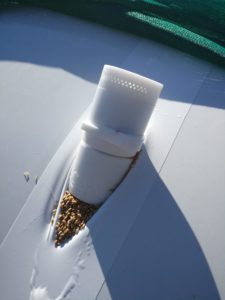 Placing a wireless sensor in a grain bag

The Controlled Atmosphere (CA) method is an approach to modify the gas composition within the storage, usually produced artificially, and maintained unchanged by adding desired gases (CO2 or nitrogen) supplied from pressurized cylinders or otherwice.  The objective of CA treatment is to produce a composition of atmospheric gases rich in CO2 and low in O2, or a combination of these two gases, within a storage enclosure or treatment chamber. These gas concentrations are maintained throughout the storage period to control storage pests.

A widely used source of these gases is tanker-delivered liquefied CO2 or N2. For large-scale application of N2 or CO2, vaporizers are commonly used. Other options include on-site generation of the desired gases either by exothermic gas generators (gas burners) or nitrogen generators.

CA methods have been used in a wide array of grain storage structures. As an example, CA methods have been successfully applied in sealed steel bins in Australia where carbon dioxide from dry ice was recirculated through the grain and in concrete grain elevators.

As these methods do not employ toxic gases or other pesticides, they are considered organic- and environment-friendly. Their artificial atmosphere prevents fungal growth and maintains the highest product quality.

How technology can help

A best practice for safe storage is the accurate monitoring of grain conditions, including gas concentrations in sealed structures. Similarly to when using fumigation gases, CA treatments with O2 and/or CO2 concentrations should be monitored to ensure a successful application. As a traditional practice, gas sampling lines have been installed to allow monitoring with gas measurement instruments. Such monitoring is performed by technical personnel on site at predetermined regular times, particularly during gas purging and during to the duration of the CA treatment. This requires a visit of the technical personnel on a regular basis to monitor the changes in gas concentrations. This method requires time and travel to the site, which makes the monitoring expensive.

Wireless sensors and a cloud-based app for monitoring grain temperature, moisture, as well as O2 and/or CO2 concentrations, have been developed by Centaur to enable remote monitoring and quality control of stored grain. Since the exposure time of CA treatments lasts many days and the treated product may be located at a distance from the location of the operator, this technology becomes a requisite tool in the package of CA treatments. The spoilage prediction algorithms incorporated in the Internet-of-Crops platform, assist the operator in decision making and guide him/her to any needed intervention during a treatment.

Coming to IAOM in Denver, CO? Book a meeting with our executive team.

This website uses cookies to improve your experience. We'll assume you're ok with this, but you can opt-out if you wish. Read More